Preparing for a Silent Auction

As some of you know, my brother Pat was murdered a few months ago. It appears to be a random attack. We believe that he stumbled onto someone in the act of committing a crime who wanted no witnesses. We are having a fundraiser at the end of September to raise awareness and to raise funds for a reward.
One of the events is a Silent Auction, and I though that some boxes of cards would be a nice thing. Since Pat's nickname (for no cruel reason) was Pig, I thought that a pig angel would be nice. This is what I came up with. 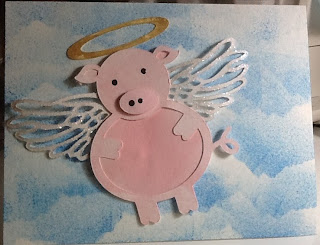 He was a  good man. I am proud that he was my brother.
Posted by NJMullins at 9:51 PM

NJMullins
Papercrafting is my therapy- my go to place when I need to create. I am a full time chemistry professor, a job I love. So I am doubly blessed- to be able to spend my days doing things I love. I have a crazy artistic family and love them very much.